Solo Leveling Wiki
Register
Don't have an account?
Sign In
Advertisement
in: Federal Bureau of Hunters, USA, Human,
and 2 more

Adam White (애덤 화이트) was the chief of the Federal Bureau of Hunters’s Asia Branch.[1]

Adam was a young man with blue eyes and slick orange hair. He usually wore a gray or blue business coat over a white dress shirt and a black tie.

As a recruiter, Adam was friendly, composed, and good with words. He was also supportive and helpful towards people he respected, such as Jinwoo.

After Jinwoo cleared the Jeju Island S-Rank Gate all on his own, Adam was tasked by his boss Michael Connor with recruiting him for America. Unfortunately, his first attempt to recruit Jinwoo did not work out as planned, as Norma Selner's powers did not work on him.[2]

After learning from his superiors in the Bureau that Sung Il-Hwan, Jinwoo's father, was the prime suspect in Christopher Reed's murder, Adam managed to get himself seated next to Jinwoo on his flight to America for the International Guild Conference and warned him of this, along with the fact that the Bureau was planning on issuing a red notice for Il-Hwan during the conference.[3]

Although Jinwoo was enraged by this revelation and started choking Adam with Ruler's Authority, he eventually calmed down after Adam quickly explained himself and made it clear that he was only trying to help. As he had only ever seen the National Level Hunters demonstrate telekinetic abilities that powerful, Adam instantly realized that Jinwoo had already reached their level of strength.[4]

When they finally touched down in the States, Adam explained that Jinwoo that he was one of the Bureau's candidates to replace Christopher and attempted to recruit him again by offering him Kamish's rune stone. However, Jinwoo took no interest in the rune stone and simply asked if he could see the dragon's corpse in person. Although he was bewildered by Jinwoo's request, Adam nevertheless reported back to his boss David Brennon and was surprised when David gave Jinwoo the go-ahead. He was also present when Jinwoo revived Kamish as a shadow soldier and was stunned by the fact that Jinwoo could somehow communicate with magic beasts.[5]

After Jinwoo's failed extraction with Kamish, Adam learned that Jinho had apparently gone missing after being picked up by hunters from the Scavenger Guild and called Laura, the Scavenger Guild's secretary, only to find out that she knew nothing about it. Realizing that something was wrong, Adam turned around to inform Jinwoo and discovered that he had already left to find Jinho himself.

By the time Adam successfully tracked down Jinwoo, he found the latter in the middle of beating Thomas Andre to death with his bare hands. Horrified and knowing the United States could not afford to lose Thomas after what happened with Christopher, Adam begged Jinwoo to stop to no avail. Fortunately, by that point, Thomas had realized that he could not win and finally conceded, prompting Jinwoo to halt his attack and release him, much to Adam's relief.[6]

Shortly after gigantic gates starting appearing all over the world, Adam was dispatched by the Bureau to monitor the one that had spawned in Canada. Several days later, while on a phone call with Jinwoo, who wanted to know how things were going with the Canadian gate, Adam noticed a red-haired man step out of the gate and descend to the ground.

Realizing that the man was Antares, the strongest Monarch, Jinwoo hurriedly told Adam to run away as fast as he could. Unfortunately, Adam was too close to the gate to get to safety and watched as Antares killed Canadian S-Rank Hunter Jay Mills in one hit and started destroying everything in his path, with his massive army of dragons close behind. With no time left, Jinwoo attempted to save Adam by teleporting him to China using Shadow Exchange. Unfortunately, before Jinwoo could activate his skill, Antares noticed the shadow soldier hidden inside Adam's shadow and used his breath attack on Adam at point-blank range, killing the latter instantly.[7] 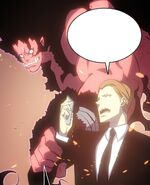