View source
watch 02:07
Spider-Man: No Way Home Trailer Dropped - The Loop
Do you like this video?
Play Sound

Antares (안타레스) was the King of Dragons and the Monarch of Destruction. He was also the strongest Monarch and the final antagonist of Solo Leveling.

Antares was a handsome middle-aged man with long red hair, a neatly trimmed red beard and glowing red eyes. He also wore silver-red armor with a high collar and a reddish-brown tailcoat.

Due to having born to destroy, Antares reveled in the devastation that he caused. He also had a very disdainful attitude towards humans and was willing to slaughter them by the millions in order to lure out the Shadow Monarch to face him in battle.

Despite his love for destruction, however, Antares had an honorable side and was willing to cut deals with those who impressed him, as displayed when he offered to withdraw his forces and spare mankind as long as Jinwoo promised to fight alongside him against the Rulers.

Eons ago, Antares fought alongside the other Monarchs in a devastating war with the Rulers at the behest of their creator, the Absolute Being. Although the Monarchs fought hard, the Rulers ultimately prevailed when the Shadow Monarch Ashborn suddenly disappeared after killing the Demon King Baran, forcing Antares and his surviving brethren to find refuge in the cracks between worlds.[1]

At some point after this, Ashborn returned and asked Antares if he could rejoin his forces. As two of the Monarchs were lost and the rest were still greatly weakened from their loss against the Rulers, Antares gladly granted his request.

Centuries later, when the war with the Rulers started up again in the human world, Antares was in the same pickle that Ashborn was in and could not find a human vessel strong enough to withstand his powers. As a result, while the other Monarchs were able to find vessels for themselves without much trouble and move about in the human world however they pleased, Antares was forced to remain behind until a proper vessel for himself could be found.

Shortly after Jinwoo killed the three Monarchs who came after him in Korea, Antares learned from Yogumunt that the Shadow Monarch had turned against them and annihilated most of their forces. Undaunted, Antares decided to deal with Ashborn's vessel himself and ordered his army of dragons to prepare for battle.[2]

Several days later, Antares descended into the human world through a gigantic gate in Canada and was met by Canadian S-Rank Hunter Jay Mills. Realizing that Jinwoo was not present, Antares killed Jay in one hit and gleefully unleashed his army onto the landscape, laying waste to entire cities and slaughtering tens of millions of innocent people, including Adam White. However, even with all the death and desolation that Antares left in his wake, the Shadow Monarch failed to show up. As a result, Antares eventually grew bored and started to wonder if he would show up to fight at all.[3]

As the strongest Monarch, Antares was one of the most powerful individuals in existence, with only Ashborn holding a candle to him in strength, and even then he was still superior to the Shadow Monarch in raw power. 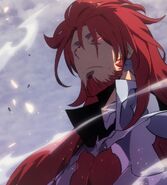 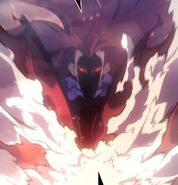