Kumamoto is a young man with long messy black hair and sharp facial features. He wears a white surgical mask and has a white eyepatch covering his left eye.[1] In his frenzied state, his eyes glow light red.

Despite his level of strength, Kumamoto is a coward and loses his composure very easily. In battle, he prefers to go after the weakest opponent from the start and even then, often attacks them from behind.

Four days before the 4th Jeju Island Raid was slated to take place, Kumamoto met up with the rest of the Jeju Island Raid Party inside the Korean Hunters' Gym. He participated in the 4v4 sparring match between the two teams and initially faced off against Baek Yoonho before changing targets to Cha Hae-In. When he got carried away against her, however, Jinwoo intervened to save her from injury and incapacitated him when he refused to back down.[2]

During the 4th Jeju Island Raid, Kumamoto was a member of Team Bravo alongside Kanae. He was later seen leaving the island alongside Kanae and Hoshino following the raid's end.

As a hunter whose abilities were recognized by Goto Ryuji, Kumamoto is obviously competent as a S-Rank. He is also said to be able to clear B-Rank Gates all by himself. 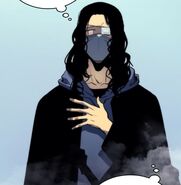