Baek Yoon-Ho (‎백윤호) is one of the 10 S-Rank Hunters of South Korea. He was once a guild member of Fiend Guild, but he left and made his own guild, the White Tiger Guild. He is a close friend of retired hunter Min Byung-Gyu, an S-Rank healer.

He was a participant of the 4th Jeju Island Reclamation Raid alongside all Korean S-Rank hunters except Sung Jin-Woo and Go Gun-Hee. He is a Fighter class hunter with a unique ability of transformation.

Baek Yoon-Ho sports a spiky orange hair but his hair turns white when he transforms into a monster. He commonly wears a black tuxedo and white collared shirt. During the Jeju Island Raid, he wore light armor consisting of a black shirt, golden claws, and shoulder guards which is destroyed once he uses his full body transformation in battle. His full transformation leads to Baek having the appearance of a pale white lion/tiger with sharp fangs and claws. His body becomes more muscular and his hair becomes longer while glowing white.

Baek Yoon-Ho has a sense of camaraderie something he showed a few times in the Red Gate arc where he saved his own men from Hwang Dong-Su's clutches. He also tried to force an explanation from Sung Jin-Woo when he saw only 3 of his guild members that survived the Red Gate.

He also shows curiosity and will not stop until he sees through it like when he was wondering how come Jin-Woo became much more powerful than the first time they met. Over time Baek Yoon-Ho realizes the truth that Jin-Woo is a growth-type hunter and essentially means he has no limits. One time his curiosity finds him surfing online and saw an anonymous post on the sixth page of google search results about someone who can see game-like stats and levels which lead him to a suspicion that the poster might be Jin-Woo since the posted date is very close to when the Jin-Woo gained consciousness in the hospital.

A red gate opens in Korea for a gate that was purchased by the White Tiger Guild. Sang-Min contact the master of the white tiger guild and Baek picks up stating that if this were true, he would have to come there personally. Yoon-Ho comes to the site of the red gate.

Yoon-Ho was introduced in the series as the guild master of White Tigers Guild. He will be shown later in the series as one of the main attack force as one of the Jeju Island Raid Party members. He fairly shows great strength but according to Jin-Woo, of all the S-Rank members in the party, he was the weakest thus Jin-Woo put his shadow on Yoon-Ho.

Warning! The following is light novel spoilers that have not been covered in the Solo Leveling Manhwa. Click on "Expand" if you wish to read.

Later, after Jin-Woo drank the Cup of Reincarnation, Yoon-Ho is introduced once again briefly as a colleague of Sung Il-Hwan and now works as a firefighter. 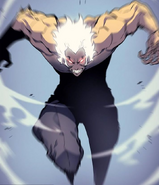 Retrieved from "https://solo-leveling.fandom.com/wiki/Baek_Yoon-Ho?oldid=10988"
Community content is available under CC-BY-SA unless otherwise noted.