Bellion (벨리온) is a servant of Ashborn and the strongest shadow in existence.

Bellion is a huge humanoid, shadow warrior with two pairs of black wings on his back, jagged black armor, blank white eyes, and glowing purple skin. He also carries a massive blade that looks like a centipede, which he wields both like a whip and a sword.

Bellion comes off as composed and does not show much emotion. However, he is deeply loyal to the Shadow Monarch, both past and present, and has never once doubted his decisions.

Bellion was born eons ago from the fruit of the World Tree, a mystical tree so large that it could blanket the entire sky with its branches alone. He then went on to serve Ashborn as his lieutenant in both life and death, and was the first individual to ever be reborn as a shadow.[1]

Shortly after Jinwoo killed the three Monarchs who came after him, Bellion arrived in the human world with the rest of Ashborn's original shadow army through a gigantic gate in Seoul that was mistaken by the Korean Hunters Association to be a threat that needed all of the world's S-Rank Hunters to handle.[2] He then proved himself worthy of his rank of Grand-Marshal by easily defeating Beru in a sparring match.

As a Grand-Marshal Grade shadow, Bellion is an immensely powerful individual and the strongest shadow to ever exist. 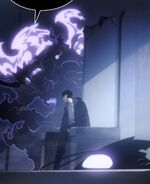