Beru (베르) is the shadow of the Ant King.

Due to having been born to kill, Beru revels in his power and has an obvious bloodlust for battle. As such, he is very brutal in combat, rarely holding back unless ordered to, and goes straight for his enemy's weak spots. He is also somewhat condescending towards his fellow shadow soldiers, as displayed when he started screaming furiously at them when they failed to follow his lead and break out of the Frost Monarch's ice prison.

Outside of battle, however, Beru is fiercely loyal to his master and has a lighter side of his personality, even complimenting him in a middle of a fight. A running gag to his character is his strange hobby of watching Korean period dramas, which caused him to develop an amusingly historic way of speech.

After Jinwoo killed the Ant King, he extracted its shadow to add to his army. When the shadow displayed the ability to talk to him and asked for a name, Jinwoo named him Beru and sent him out to go slaughter what was left of the ant colony.

When Cha Hae-In asked Jinwoo if she could join his guild, he decided to test her by having her fight Beru and ordered him not to hurt her under any circumstances. Although Beru initially followed through with the order, he eventually lost control when Cha stabbed him in the back and attacked her with the intent to kill, forcing Jinwoo to step in and grab his hand before the attack could land.

Several days later, while he was in the middle of helping the Knights Guild clear an A-Rank Gate in Busan, Jinwoo started to receive signals from the shadows that he had planted on his sister Jinah that she was in danger, prompting him to summon Beru to take his place. As the hunters in the Knights Guild were all too intimidated by him to keep going, Beru decided to take the lead and made easy work of the monsters inside the gate, including the boss, which he killed in one hit.

During the time when Jinah was recovering from the trauma she sustained during the orc attack at her school, Jinwoo gave Beru the task of watching over her while he was away at work. Since Jinah spent most of her time sleeping, Beru eventually got bored and used the opportunity to watch Korean period dramas, causing him to develop a historic manner of speech. Unfortunately for Beru, Jinwoo easily found out about this by using Shadow Preservation and scolded him for it soon afterwards.

Upon arriving in Tokyo, Jinwoo deployed his army, including Beru, into the city to slaughter the surviving giants. Beru would then later help Jinwoo kill the giant guarding the Tokyo S-Rank Gate by entering its body through its eye and ripping it to shreds from the inside.

After Jinho was nearly killed by Hwang Dongsoo, Jinwoo used Shadow Exchange to swap places with Beru and ordered him to heal Jinho to the best of his ability.

As a Marshal Grade Shadow and the shadow of the Ant King, Beru is an immensely powerful individual. He is also one of the strongest shadows in Jinwoo's army and is only rivaled by Igris and surpassed by Bellion. 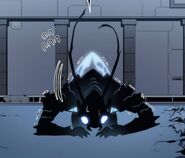 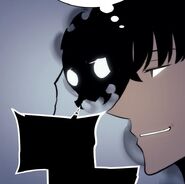 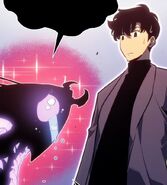