China (中国) is the largest country in East Asia. It is a military superpower, with more S-Rank Hunters than any other nation in Asia, and is one of the four countries who have managed to clear at least one S-Rank Gate with its own hunters (alongside America, Russia, and France). It is also the homeland of Liu Zhigang, one of the five National Level Hunters.

Unlike the rest of the world, China ranks their hunters using a 1-5 star system instead of the standard S-E ranking system. Liu is the only Chinese hunter to have been given a rank of seven stars as acknowledgement of his immense power. 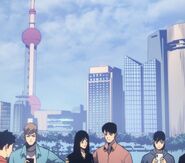