Choi Jong-In (최종인) is a Korean S-Rank Hunter who specializes in fire magic and the Guild Master of the Hunters Guild.

Choi is a lanky young man with red hair in a curtain hairstyle that is parted over the left side of his right eye. He also has a very amicable smile and tends to wear striped business suits. When using his powers, his eyes glow bright magenta. On raids, he wore a suit of goldish-brown and white suit with a flowing red cape and a set of eight rings.

Choi is a sly and friendly individual who does not easily falter under pressure and is quick to catch on to things. He is also a chain smoker and can almost always be found outside smoking a cigarette.

Choi is the strongest mage-type hunter in Korea and implied to be around Baek's level of strength. However, he is still significantly weaker than his lieutenant Cha Hae-In. 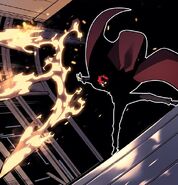 Choi in the new timeline created by the Cup of Reincarnation