Christopher Reed (크리스토퍼 리드) was the strongest hunter in America and one of the five National Level Hunters, ranking 3rd in the world.[1]

Chris was a muscular young man with wavy brown hair that was shaved on both sides of his head, blue eyes, and slight facial hair. While using his powers or agitated, his eyes glowed light blue.

In his first appearance, he was dressed in a light gray long-sleeved shirt and pants with blue crux sandals. In his photo on the news, he was pictured wearing a pale gray jacket over a teal dress shirt.

Chris was somewhat arrogant and took great pride in his powers. His ego did not make him stupid, however, as he took Norma's warning of his predestined death seriously after some thought. He was also implied to be a lone wolf, as he lived in solitude, and was not the type of man to go down without a fight, as he attacked the three Monarchs who came after him even though he knew that he was going to die.

Shortly after a S-Rank Gate spawned in Maryland, Chris was visited and warned by Norma about his impending death from a vision that she had seen in her dreams. Although he was initially unconvinced that there was actually someone strong enough out there to kill him, Chris decided to take her warning seriously after some consideration and accepted a piece of paper from her with Go Gunhee's phone number on it so that he would be able to contact Jinwoo for help in case Norma's vision came true.[2]

Several days after Norma's visit, Chris woke up in the middle of the night to find out that it was eerily quiet inside his home, unaware that he had been trapped inside a dimensional gap. Three Monarchs then appeared, one in front and two from behind, and although Chris had no idea who or what any of them were, he knew that they had shown up to kill him.

Realizing that Norma had been right to warn him and that it was too late to call for help, Chris went all out against the three Monarchs in the hopes that he could kill at least one of them before they killed him. Unfortunately, it was a futile effort, as Chris was the only one to die in the ensuing battle. His mutilated body was later discovered in the ruins of his mansion, much to the shock of those who found him.[3]

As the vessel of a Ruler and a National Level Hunter, Chris was one of the strongest hunters in the world. Unfortunately, the full scale of his abilities were never displayed, as he was killed in action in an off-screen fight. 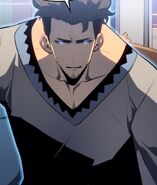