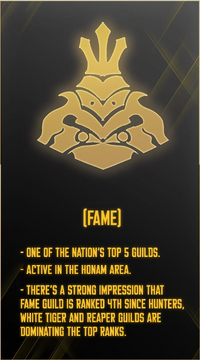 Fame Guild (명성 길드, Myungsung Gildu) is one of the top-5 Korean guilds. The guild's area is in Honam region and is in charge of the provinces with the Knights Guild.

The Guild Master is Ma Dong-Wook, an class S tanker. Ma Dong-Wook tried to woo Jin-Woo in his guild since their guild was filled with fighters but he was ignored/rejected.

Retrieved from "https://solo-leveling.fandom.com/wiki/Fame_Guild?oldid=11790"
Community content is available under CC-BY-SA unless otherwise noted.