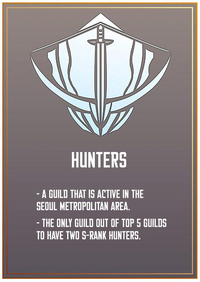 Hunters Guild (헌터스 길드, Heonteosu Gildu) is the strongest guild among the top five Korean guilds. Their grounds are within the Seoul Metropolitan area, which is also the grounds for the White Tiger Guild and Fiend Guild. It is the only Korean guild to have two S-Rank Hunters.

Retrieved from "https://solo-leveling.fandom.com/wiki/Hunters_Guild?oldid=9039"
Community content is available under CC-BY-SA unless otherwise noted.