The Iron Body Monarch was the King of Monstrous Humanoids and one of the nine Monarchs.

The Iron Body Monarch was a handsome young man with blonde hair and green eyes. He wore a long white coat with a glowing blood-red collar, black pants and shoes, small earrings, and a simple gray undershirt. When using his powers or agitated, his eyes glowed lime green.

The Iron Body Monarch was an egotistical and overconfident individual who held extreme disdain towards mankind, as displayed by how he genuinely believed that Jinwoo was not fit to be the second Shadow Monarch simply because he was human. However, despite his pride, he was still rational enough to realize that he stood no chance against Jinwoo without the support of Antares, the strongest Monarch.

Shortly after the Tokyo S-Rank Gate was cleared, the Iron Body Monarch, Querehsha, and the Beast Monarch ambushed Christopher Reed in his home. Although Chris activated his Spiritual Body Manifestation to defend himself, he was still not strong enough to fend off all three of them. As a result, they easily murdered him in the battle that followed, leaving his mutilated corpse behind for the humans to find.[1]

When the Frost Monarch asked the other Monarchs to help him kill Jinwoo while he was still human, the Iron Body Monarch was the first to refuse, as he believed that fighting the Shadow Monarch by themselves was suicide and that it was better to wait for Antares to return instead.[2]

When Antares invaded the human world, the Iron Body Monarch went along with him and confronted Thomas Andre upon spotting him on the battlefield. However, in his arrogance, he failed to notice that Thomas had come prepared and was caught completely by surprise when Bellion and Beru emerged from his shadow. Realizing that he had fallen right into Thomas and Jinwoo's trap, the Iron Body Monarch attempted to contact Antares via telepathy, but was shocked to find out that Tusk had cut off his connection.[3]

Enraged by Jinwoo's tricks, the Iron Body Monarch activated his Spiritual Body Manifestation and attempted to kill Thomas, Bellion, and Beru all by himself. However, his efforts ultimately failed, as the trio was able to easily overpower and dispatch him in the ensuing battle.[4]

As a Monarch, the Iron Body Monarch was an immensely powerful individual. 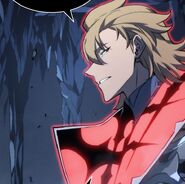