Jima (지마) is the shadow of Boss Naga.

As an Elite Knight Grade shadow, Jima is on the level of a S-Rank Hunter. As a testament to his strength, he was able to strike down a giant in one hit. 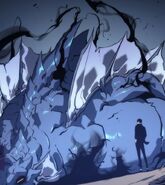