Jonas (조나스) was the strongest hunter in Brazil, ranking 6th in the world.[1]

Jonas was a young man with tan skin, long black dreadlocks, and a black tattoo on the upper right side of his chest. In his photo on the news, he was pictured wearing a purple and yellow jacket over a simple white shirt.

Jonas was originally lined up to attend the International Guild Conference as his country's representative, but mysteriously disappeared shortly before the event was scheduled to take place. After searching for him in secret for several days, the Brazilian government somberly confirmed his death when searchers found his corpse floating in a river, having been killed by the Monarchs earlier.[2]

As the vessel of a Ruler, Jonas was one of the strongest hunters in the world. Unfortunately, the full scale of his powers was never put on display, as he was killed in an off-screen fight. 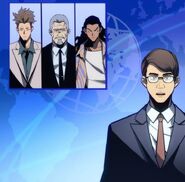