Jung Yerim (정예림) is a Korean A-Rank healer under the Knights Guild.

Yerim is a pretty young woman with a tomboy haircut and large gray eyes. On raids, she wears poofy peach robes with white gloves and a large peach crest on the right side of her head.

Yerim is a friendly girl who takes a noticeable amount of pride in her powers, as displayed when she was shocked by how Beru was more skilled at healing than she was. She is also quite brave, as she was willing to wrestle with a shadow ant to keep it from eating a valuable monster corpse.

When a top-tier A-Rank Gate spawned on her guild's turf in Busan, Yerim suggested to her guild master Jongsoo that they could ask Jinwoo for his help. Jong-Soo agreed, as he didn't want to give up the gate to the Fame Guild, and the two of them alongside Yoontae went to go meet Jinwoo in-person. To their delight, Jinwoo immediately agreed to participate on the condition that they would pay him half of their profits.

When Jinwoo arrived in Busan the next day for the raid, he was almost immediately swarmed by the rest of the strike squad, who bombarded him with questions over his powers and his performance during the Jeju Island Raid. Seeing this, Yerim ran up in front of them and told them to stop pestering Jinwoo, before introducing herself to him as the Knights Guild's main healer.

As an A-Rank healer, Yerim is one of the top hunters in her guild. 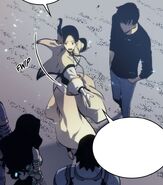 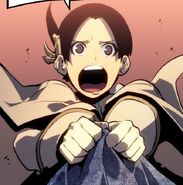 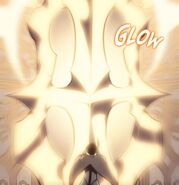 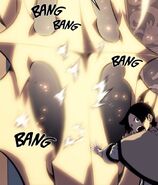