Kamish (카미쉬) was an immensely powerful magic beast and the boss of the first S-Rank Gate that ever opened. He was responsible for single-handedly devastating the American west coast area and massacring all but five of the S-Rank Hunters who were fighting against him. As a result, Kamish is regarded as humanity's greatest calamity.

Kamish had a fierce ego and an intense bloodlust towards humans, as displayed when he attempted to kill some with his breath attack after he was revived as a shadow. At the same time, however, he was willing to listen to reason, as he immediately halted his attack after learning that he was no longer being controlled by the Rulers.

As a shadow, Kamish was loyal and respectful towards Jinwoo, addressing him with honorifics and even comically wagging his tail when the human touched his nose.

Kamish was originally a servant of Antares, the King of Dragons and the strongest Monarch. At some point during the first war with the Rulers, he was captured by the enemy and had an essence stone implanted inside his body.

Eons later, when the first S-Rank Gate ever spawned in America, Kamish emerged from the portal and laid waste to the entire west coast area, slaughtering hundreds of S-Rank Hunters in his wake. His rampage only ended after the last five surviving S-Rank Hunters banded together and successfully killed him.[1]

In the aftermath of Kamish's death, his corpse was claimed by the American government and preserved in the exact same position that he had died in. The FBH's HQ was eventually built over Kamish's corpse, which was stored away in the building's underground basement and shielded with a wall of mana-reinforced glass. A rune stone was also discovered inside Kamish's corpse, but since there were no mage-types amongst the National Level Hunters, it was left to collect dust in the basement of the FBH's HQ. Meanwhile, Thomas Andre, one of the five surviving hunters, had Kamish's sharpest fang, which he had been allowed to keep as a souvenir after the dragon had bit him with it, crafted into a pair of daggers called Kamish's Wrath.[2]

About eight years after Kamish's death, Jinwoo was granted permission by the FBH to see the dragon's corpse in person. He successfully revived Kamish as a shadow, although for unknown reasons it took two tries to work.[3] Upon being reborn, Kamish noticed the humans standing behind Jinwoo and attempted to use his breath attack on them, forcing Jinwoo to order him to stop and inform him that he was no longer under the Rulers' control. Upon learning this, Kamish calmed down, bowed his head to Jinwoo, and revealed that he had served Antares back when he was alive.

Unfortunately, due to having been dead for so long, Kamish's body began to crumble away. Realizing that his time was short, he quickly informed Jinwoo that there were four humans to his knowledge who had been bestowed power by the Rulers and warned him to be wary of them. He then expressed sadness for not being able to serve Jinwoo as one of his shadow soldiers before his body completely dissolved altogether.[4]

As a dragon known by the epithet of humanity's greatest calamity, Kamish was obviously one of the strongest magic beasts that mankind ever faced and was at least on par with the Ant King in raw power. 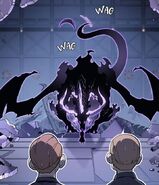