Lee Joohee (이주희) is a Korean B-Rank healer and one of Jinwoo's old friends, having known him ever since his days as a E-Rank Hunter.

Joohee is a compassionate and friendly woman who is fearful of the dangers of hunting, as displayed by how she always went on easy raids despite being a B-Rank healer and eventually retired altogether when she could not recover from her traumatizing experience in the Double Dungeon. She also has a close relationship with Jinwoo, as she frequently accompanied him on raids to make sure he didn't get killed and even got mad at him at one point for how often he got injured.

Despite the trauma she had endured, Joohee willingly participated alongside Song Chi-Yul in defending the shores of Busan in case the ants invaded the city during the Jeju Island Raid.[1] When a large swarm of ants eventually arrived, Joohee nervously prepared to fight them, but was caught by surprise when Beru suddenly came out of nowhere and effortlessly slaughtered them all.[2]

After the Rulers used the Cup of Reincarnation one last time on Jinwoo's request, Joohee lost all her memories of the original timeline.[3]

As a B-Rank, Joohee is a skilled healer and was able to heal Jinwoo on multiple occasions with little trouble. She was also able to use buff magic, as displayed when she gave Jinwoo a haste buff during his fight with Kang Taeshik. 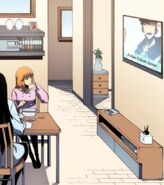 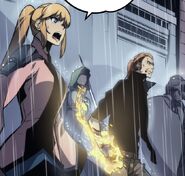 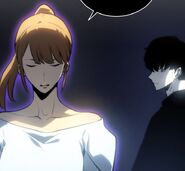 Joohee in the new timeline created by the Cup of Reincarnation