Lee Minsung (이민성) is a famous actor and an A-Rank Hunter under the Fiend Guild.

Minsung is a handsome young man with black eyes and wavy black hair. During the 4th Jeju Island Raid, he wore a set of yellow and red armor.

In front of cameras, Minsung acts kind and humble and has a large following in Korea as a result. In reality, however, he is a very narcissistic and self-centered individual who relishes the spotlight and tends to behave like a spoiled child. Like most narcissists, his ego is very fragile and as a result, he is easily intimidated by people who wield more influence than himself and is prone to quickly losing his cool whenever someone steals the attention away from him.[1] He is also cunning, as he deliberately joined the Field Guild in an attempt to divert the public's attention from the fact that he dodged the Korean military draft.

At some point in the past, Minsung rose to prominence as an actor and gained a loyal, king-sized fanbase in Korea as a result. At the same time, however, he gained a negative reputation in the Korean entertainment industry for his big ego and his obnoxious tendency to flirt with top models like Yoo Soohyun.[2]

After being evaluated as an A-Rank, Minsung decided to drop his acting career for the time being and join the Fiend Guild in order to draw the public's attention away from the rumors that he dodged the Korean military draft. To commemorate the event, Minsung decided to put on a big show for the press on the day that the Fiend Guild was officially supposed to accept him into their ranks. Unfortunately for Minsung, Jinwoo happened to be announced as Korea's 10th S-Rank Hunter on the exact same day, completely ruining his show and kicking him out of the spotlight.[3]

During the Jeju Island Raid, Minsung was stationed off the coast of the island alongside the rest of his guild with orders to kill any ants that came their way. As he had never had any battle experience before, Minsung was completely caught off-guard when the ants began to swarm following the Ant King's defeat and immediately panicked at the sight of the creatures flying towards him, prompting one of his guild members to call him a wuss.[4]

As an A-Rank, Minsung is supposedly quite strong for a hunter. However, he has no actual raiding or battle experience and is easily frightened on the job, making him virtually useless out on the field. 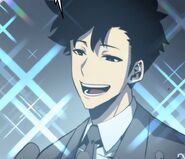 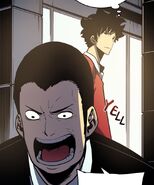 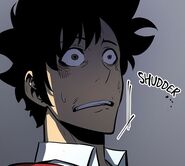 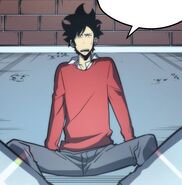 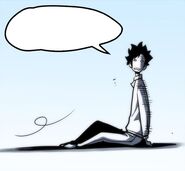 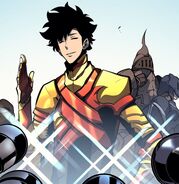 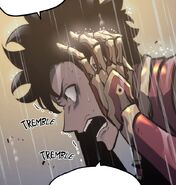 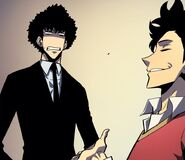 Minsung in the new timeline created by the Cup of Reincarnation