The Hero of China

Liu Zhigang () is the strongest hunter in China and one of the five National Level Hunters, ranking 2nd in the world.[1]

Zhigang is a muscular and handsome young man with dark yellow eyes and long black hair that he wears in a ponytail, with several large additional strands of hair dangling from his head like leaves from a tree. When agitated or using his powers, his eyes glow bright yellow. He is usually seen wearing red or yellow cloaks with thick black collars, black pants, and black boots.

Zhigang is brash and battle-hungry, as he was disappointed by the fact that he didn't get a chance to face off against the Ant King. He is also blunt in conversation, as displayed when he said to a Chinese reporter that Sung Jinwoo was worlds above him in strength and dismissed those who believed otherwise as fools. He does, however, act friendly and humble towards those who have gained his respect.

In the immediate aftermath of the Jeju Island Raid, Zhigang took part in defending the Chinese east coast area and at one point, easily slaughtered hundreds of ants in a single strike.[2]

When word got out that a giant from the Tokyo S-Rank Gate was crossing the ocean to China, Zhigang intercepted and easily killed the beast off the Chinese east coast before it could make landfall.[3] However, he was still somewhat surprised by the giant's strength and noticed that Jinwoo was able to take the giants down more easily than he did. As a result, Zhigang began to take an interest in him and eventually asked the Korean Hunters Association to send him all the public information that they had on Jinwoo at the time.[4]

As the strongest hunter in China, Zhigang was invited to represent his country at the International Guild Conference and was intrigued to learn that the primary suspect in Christopher Reed's murder was Sung Il-Hwan, Jinwoo's father. After the conference's conclusion, Zhigang approached Jinwoo for a chat, shook his hand, and congratulated him for his victory against Thomas Andre.[5]

As the vessel of a Ruler and a National Level Hunter, Zhigang is one of the strongest hunters in the world. He was also the strongest hunter in Asia until Jinwoo surpassed him in strength and was noted to be vastly superior to Goto Ryuji, Japan's strongest hunter, in raw power by a Chinese navy captain who had seen them both in action firsthand.[6] 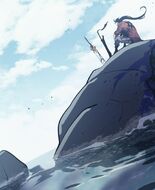 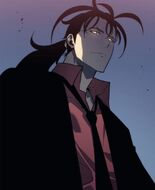 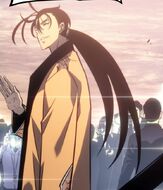 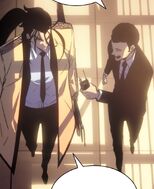 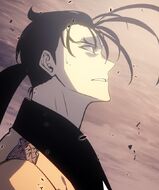 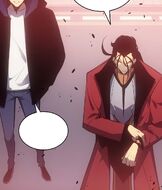