Byung-Gyu was a thin young man with spiky black hair, pale skin, and black eyes. In his first appearance he wore a black coat over a white shirt and black slacks. During the 4th Jeju Island Raid, he wore teal-black armor with a gray hoodie, carried a spellbook on the right side of his waist, and wielded a brownish-golden mace.

As a shadow, Byung-Gyu had bright glowing blue skin and wore a tattered, black hooded cloak. He also had blank white eyes and carried a teal-colored spellbook in his right hand.

Byung-Gyu was a friendly and compassionate individual with a profound distaste for violence. As a result, he retired early on and was planning on living a normal civilian life as a Korean history teacher before the Korean government announced that they were planning on launching a fourth search-and-destroy mission on Jeju Island. At the same time, however, Byung-Gyu had a strong sense of duty and willingly participated in the 4th Jeju Island Raid even though he hated fighting and did not enjoy being a hunter.

About a year before the first Double Dungeon Incident, Byung-Gyu participated in the 3rd Jeju Island Raid alongside Eunseok and his best friend Baek Yoonho. Unfortunately, the raid went badly and Byung-Gyu was so traumatized by Eunseok's death that he chose to retire and pursue other career options instead.

About five days before the 4th Jeju Island Raid was scheduled to launch, Byung-Gyu went out drinking with Baek and told the latter that he was planning on becoming a history teacher. At the same time, however, he also made it clear to Baek that there was no way in hell that he was ever going back to Jeju Island.

Despite his initial decision to sit out of the 4th Jeju Island Raid, Byung-Gyu ultimately changed his mind and joined the Jeju Island Raid Party the next day. During the raid itself, he assisted his teammates by giving them stat buffs and quickly healing them whenever they got injured.

Unfortunately, their killing of the Ant Queen attracted the attention of the Ant King and he ferociously attacked them upon discovering the queen's corpse, grievously injuring them with one strike each. Knowing that his teammates couldn't survive the Ant King's assault without his healing magic, Byung-Gyu activated his Disguise skill and tried to heal them as best as he could. Unfortunately, the Ant King was able to track Byung-Gyu's presence and brutally attacked him last, impaling him through his chest from the back side. Realizing that he was a goner, Byung-Gyu yelled at Baek to run just before the Ant King devoured his head, killing him instantly and absorbing his powers.

After Jinwoo killed the Ant King, he revived Byung-Gyu as a shadow in order to heal Cha Hae-In, who was on the brink of death due to the severity of her injuries. Once Byung-Gyu had done his job and saved Cha's life, Jinwoo decided to honor Baek's request to allow Byung-Gyu to rest in peace and terminated the extraction, allowing the latter's soul to pass on peacefully.

As a S-Rank healer, Byung-Gyu was a master at healing magic and could almost instantly heal his fellow hunters even from severe wounds. According to himself, he also had the combat ability of an A-Rank. 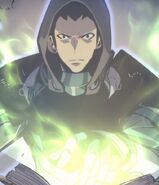