Kyung-Hye is a slender middle-aged woman with long black hair, slight wrinkles, gray eyes, and a small burn scar on the left side of her neck.

Kyung-Hye is a very selfless and loving woman who cares about her children more than anything else, as displayed when she asked Jinwoo as to how Jinah was doing almost immediately after waking up from her coma. She was also very faithful towards her husband and deliberately chose not to move out of her family's longtime apartment in the hopes that he would eventually come back to her.

Ten years prior to the first Double Dungeon Incident, Kyung-Hye's husband Il-Hwan mysteriously disappeared inside a dungeon during a raid. Although he was presumed dead, Kyung-Hye refused to believe it and took to raising their two children on her own.

At some point during his childhood, Jinwoo attempted to wash Kyung-Hye's hair but accidentally used boiling hot water and scalded her neck, much to his horror. Despite this, his mother did not get angry at him and made sure that he was alright first before attending to herself.[1]

About four years before the start of the main storyline, Kyung-Hye suddenly developed symptoms of Eternal Slumber. Shortly before she succumbed to the effects of the disease and fell into a coma, she made Jinwoo promise to take care of Jinah while she was asleep.

After killing Baran, Jinwoo successfully crafted the Holy Water of Life, a consumable that could cure any ailment, and used it on his mother, successfully curing her of Eternal Slumber and any other health problems she sustained during her coma. Upon waking up, Kyung-Hye immediately asked her son as to how Jinah was doing and was relieved to hear that she was alright and that Jinwoo had kept his promise to her.

Although the doctors initially wanted to keep Kyung-Hye at the hospital to figure out how she was cured, they quickly changed their minds after learning that Jinwoo was a S-Rank Hunter and discharged her immediately, allowing her to reunite with Jinah[2] and return home the very next day.

About a week after the death of Chairman Go Gunhee, Jinah suddenly asked Kyung-Hye if they could move out. As she still believed that her husband was alive somewhere, Kyung-Hye kindly told her daughter no and went back to doing her chores. Several days later, however, when Jinwoo was seemingly killed on live television by the Beast Monarch, Kyung-Hye was seen hugging Jinah and sobbing in despair.

After Il-Hwan died from using too much power in his battle with the Frost Monarch, Kyung-Hye, as if somehow sensing her husband's death, finally agreed to her daughter's request to move out of their old apartment. When Jinwoo later came back home alive and well, Kyung-Hye and Jinah both hugged him out of relief that he had survived his battle with the Monarchs.[3] 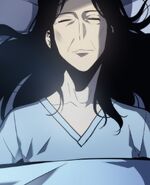 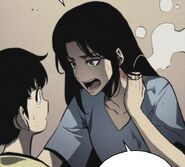 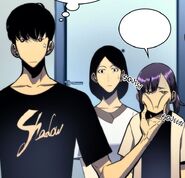 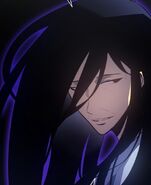 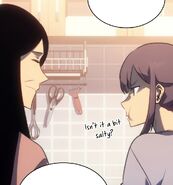 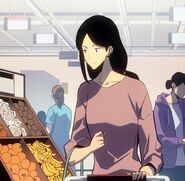