Jinchul is a handsome young man with slick orange hair, having only a single strand poking out and black eyes. When using his abilities or agitated, his eyes glow purple.

As a high-ranking official within the Korean Hunters Association, he is typically seen wearing a black tux. On raids, he wears a shiny suit of silver armor with blue trims and golden shoulder plates.

Jinchul is a very stoic man who rarely ever shows emotion. As noted by Choi Jong-In, he does not like to speculate about things and prefers to stick only to the facts. Much like his superior Go Gunhee, Jinchul also despises those who are only after personal gain.

Despite his cold and professional exterior, however, Jinchul deeply respected Gunhee and was depressed for days after learning about his murder. He is also capable of showing anger if he is pushed too far, as displayed when he intimidated Lee Minsung into standing down with his strength.

In the aftermath of the first Double Dungeon Incident, Jinchul visited Jinwoo in the hospital that he was staying at to measure his mana output on the belief that Jinwoo had undergone a reawakening. When it turned out to be a false alarm, Jinchul left the hospital disappointed, unaware of the fact that Jinwoo had gotten something better from the Double Dungeon than a simple reawakening.

In the aftermath of a massacre caused by Kang Taeshik, Jinchul appeared on the scene to investigate the situation and immediately assumed that there was no way that Jinwoo could have killed Taeshik due to their difference in rank. After concluding his investigation, Jinchul warned Jinwoo that Hwang Dong-Su was after him for the death of his brother and suggested that he leave the country until things cooled down.

When Hwang arrived in Korea to hunt down Jinwoo, Jinchul was sent to monitor him for the duration of his time in the country. Without any other choice, Jinchul was forced to act as Hwang's chauffeur and drove him to the gate where Jinwoo was supposed to be located. When Baek Yoonho and Hwang got antagonistic with each other, Jinchul stepped in and grabbed their arms before their attacks could connect, defusing the situation and prompting Hwang to head to his hotel for the night.

Around a week after the Red Gate Incident, Jinchul was talking with Choi Jong-In outside the Korean Hunters Association's testing center when the two of them overheard a commotion going on inside the building. Curious as to what was going on, Jinchul walked in to find out that Jinwoo was the cause of the commotion due to having just been re-evaluated as a S-Rank Hunter.

Later that night, Jinchul located Jinwoo as the hospital his mother was a patient at and convinced him to come with him to see Go Gunhee. He then watched silently as Gunhee tried and failed to recruit Jinwoo for the Association and eventually decided to take up Gunhee's offer to go out for some drinks.

On Jinwoo's second day as a miner under the Hunters Guild, Jinchul attempted to track him down at the gate and learned that not only had Jinwoo gone inside the gate with the main strike squad, but also that Cha Hae-In was looking for him too. Seeking to bring him in anyway, Jinchul and his men walked through the gate and eventually made it to the boss room, where they witnessed Jinwoo in the middle of a fight with Kargalgan and his high orc troops.

After Jinwoo killed Kargalgan and cleared the dungeon, Jinchul helped him get back to the human world without making a scene and ordered the rest of the strike squad to keep quiet about what they had seen so that they wouldn't alert the press and exacerbate the situation.

On the day that Jinwoo was set to be officially announced as Korea's 10th S-Rank Hunter, Jinchul and his men were tasked with making sure that nobody entered the Association's testing center until Jinwoo's official re-evaluation was finished. When Lee Minsung attempted to forcefully enter the building as part of his show for the press, Jinchul was able to intimidate him into backing off due to his superior power.

When the announcement was finally made, the press attempted to enter the building themselves to get an interview with Jinwoo, but were thwarted when Jinchul and his men forcefully blocked their path.

After Gunhee was successfully able to convince the National Assembly to allow Jinwoo to raid high-ranking dungeons alone, he sent Jinchul to observe the Ahjin Guild's first official A-Rank dungeon raid and make sure that everything worked out safely. As he had never actually seen Jinwoo in action up-close, Jinchul was astonished by his battle prowess during the raid, especially when he killed the boss of the dungeon in one strike. The experience left Jinchul overwhelmed and drained, and he ultimately reported to Gunhee that Jinwoo was so strong that the raid was like a massacre.

When Jinwoo and Jinho were selected by the FBH to represent Korea at the International Guild Conference, Gunhee sent Jinchul to accompany them on their trip to America as their bodyguard. However, as they obviously didn't need any protecting, Jinchul was very embarrassed by his role in the situation, as demonstrated when Jinho comically teased him about it.

The news of Gunhee's murder took a heavy toll on Jinchul, causing him to mourn privately for several days. By the time he turned up at Gunhee's funeral, his hair had grown significantly longer and his facial hair was completely unshaved. Upon meeting Jinwoo in the crowd, Jinchul apologized for his appearance, admitting that he hadn't been himself since the Chairman's death, and thanked the former for staying at Gunhee's side until he died.

About a week after Gunhee's death, the top brass of the Association, Jinchul included, had a meeting to decide who should be the next Chairman. After some discussion, the officials chose to offer the position to Jinchul, believing him to the best possible candidate due to his years of experience as Gunhee's right-hand and his connections with Jinwoo. Although Jinchul was initially hesitant to take the spot, he eventually changed his mind after some thought and officially succeeded Gunhee soon after as the new Chairman of the Association.

Jinchul is one of the strongest A-Ranks in Korea and is very close to reaching S-Rank. It should be noted Jin-Chul was able to sense Jin-Woo's mana signature from afar, something that even an S-rank like Choi Jong-In couldn't. 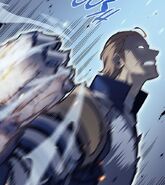 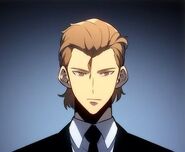 Jinchul in the new timeline created by the Cup of Reincarnation