Yogumunt (요그문트) was the King of Demonic Spectres and the Monarch of Transfiguration.

Yogumunt was an old man with gray hair, light red eyes, and a blood-red blob symbol on his torso. He wore a tattered blackish-purple hooded cloak, a pale yellow bone-like mask over his mouth, and two metallic horn-like objects extending from his upper back. Also, when using his powers or agitated, his eyes glowed pinkish-purple.

Yogumunt appeared to view humans as a feeble and inferior species, as noted by how he called Sung Il-Hwan a weakling to his face. However, despite his pride, he was still smart enough to acknowledge that he stood no chance against the new Shadow Monarch without Antares' support.

While the Frost Monarch was out hunting for the Rulers in America, Yogumunt ran into him and told him that one of the Rulers had been located in Korea. Before they could leave, however, they were ambushed by Il-Hwan, who attempted to kill them both to no avail.[1]

When the Frost Monarch asked the other Monarchs to help him kill Jinwoo while he was still human, Yogumunt was quick to refuse his request, as he did not want to risk Baran's fate.[2] Several days later, after Jinwoo killed the three Monarchs who came after him in Korea, Yogumunt met with Antares and informed him that the Shadow Monarch had betrayed them.[3]

When Antares invaded the human world, Yogumunt went along with him and attempted to help him crush Jinwoo by creating countless portals to summon out the rest of the dragon army. However, this plan ultimately failed, as Jinwoo was able to immoblize every single one of Antares' minions, including Yogumunt himself, with Dragon's Fear.[4] Jinwoo then used Shadow Exchange to teleport both himself and Antares to a remote island in Japan, leaving Yogumunt's ultimate fate unknown.

After he asked the Rulers to rewind time using the Cup of Reincarnation, Jinwoo began hunting down the Monarchs in the chaos world and taking them out one by one. Two years later, after he had assassinated every other Monarch except for Yogumunt and Antares, Jinwoo confronted Yogumunt alone and easily killed him in the ensuing battle.[5]

As a Monarch, Yogumunt was an immensely powerful individual. 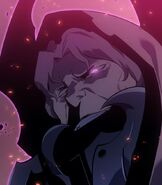