Yoo Jinho (유진호) is a Korean D-Rank Hunter and the Vice-Guild Master of the Ahjin Guild.

Jinho is a young man with gray eyes, a boyish face, and custard-colored hair that is shaved on both sides of his head. Much like Jinwoo, he is usually displayed wearing casual clothing, even on raids.

Jinho comes off as a dork and serves as the comic relief of the series, mainly due to his tendency to take things the wrong way. At the same time, however, he is fiercely loyal to Jinwoo, who he regards as an older brother figure, and has a strong desire to make his own living.

Jinho has two running gags to his character. The first is his odd habit of dressing up in fancy and expensive armor. The second is his inability to hold his liquor, as displayed when he got wasted while going out for drinks with Jinwoo and then with his cousin Soohyun.[1]

As a D-Rank Tanker, Jinho is somewhat weak for a hunter and has little battle experience, due to the fact that Jinwoo is typically the one who does all the fighting during their raids together. However, he was strong enough to shield an elderly couple from falling building debris during the Tokyo Crisis and was durable enough to stay conscious even when Hwang Dongsoo brutally tortured him. 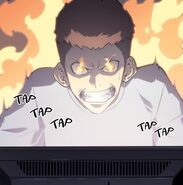 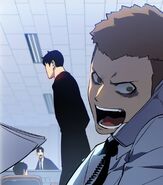 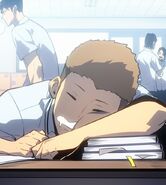 Jinho in the new timeline created by the Cup of Reincarnation