Yoo Soohyun (유수현) is a famous model and Jinho's cousin.

As one would expect given that she's a model, Soohyun is a beautiful young woman with long silky brown hair (later dyed a pale shade of purple), large brown eyes, and a perfect hourglass figure. While going around in public, she tends to dress casually and wear a hat or a mask to prevent people from recognizing her.

Soohyun is affable and charming, and maintains a good relationship with Jinho, although she is still occasionally annoyed by his dorky antics. She is also deeply disdainful towards those with egotistical tendencies, like Lee Minsung, and enjoys watching them get humiliated in public.

In the novel, Soohyun is also implied to be close with her father, as he is very protective of her even though she is obviously strong enough to defend herself against anyone stupid enough to get physical with her.

Two days before Jinwoo was to be announced as Korea's 10th S-Rank Hunter, Soohyun was dragged out by Jinho to go eat barbecue with him and was somewhat irritated at her cousin for forcing her to make time for him for no real important reason. By that point, however, Jinho was completely wasted and she was forced to put up with his drunk behavior until Jinwoo called in.[1]

After learning from Jinwoo that he wanted someone who had no actual interest in hunting for the third member of their guild, Jinho gave Soohyun a call, as she fit the bill perfectly. Although she was initially reluctant to join out of the belief that Jinho was walking her into a scam, Soohyun immediately changed her tune after learning that he was working for the Sung Jinwoo and was delighted to join the Ahjin Guild as its third member, even eagerly asking Jinwoo if they could take a selfie together so that she could post it on social media.[2] However, due to the fact that they were both celebrities, Soohyun's selfie post attracted widespread publicity from the press and as a result, Jinwoo was unfortunately forced to deal with a hungry mob of reporters on the day of his guild's first raid.[3] 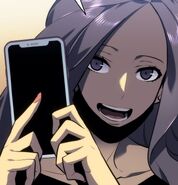